Our consultants will help you.

We will be pleased to help you

To the request form

unrepeatable, unbeatable, unchallenged the number one.

A true success story. Technology you can rely on.

It has been 10 years since the steadfast DOLL panther was first launched. Back in 2010, we were the first company to introduce independent wheel suspension to the market – and it was a resounding success. 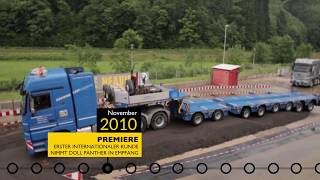 Year warranty on all undercarriage components

These are all things to be proud of.

And they give us ample reason to celebrate the panther's 10th anniversary. Join us as we take a look back at the history of the panther: there's so much to discover!

By the way: You want to know exactly? Then you will find all the information you need here!

The birth of the panther

It all began with a development contract in 2007. The contract centred around independent wheel suspension – and laid the foundation for an outstanding innovation. Things really got going at the start of 2009, when an inimitable form of axle technology was born in the heart of the Black Forest. Today, this technology is known throughout the heavy-duty sector as the DOLL panther.

From there, things moved swiftly for the panther. We worked hard on development and design and, less than 12 months later, the first prototype featuring the new technology left the production facility in Oppenau. The 2-axle low-bed was put through its paces by Spedition Gutmann GmbH & Co. KG on its maiden trip.

Unlike its animal counterpart, the DOLL panther is definitely not shy. Just four months after the initial test drive, it made its first public appearance as a 7-axle semi low-loader. The whole industry was amazed by this completely new technology – the heavy-duty market would never be the same again. That's why we have no hesitation in referring to the panther as "The Original".

Following its appearance at the bauma trade fair, the 7-axle panther was purchased by Hegmann Transit GmbH & Co. KG, along with another semi low-loader featuring the new axle technology. And the fleet has expanded significantly since then: the heavy-duty specialists from Sonsbeck still rely on "The Original" and have purchased more than ten panther trailers over the years.

To cap off a brilliant first year for the new axle technology, we produced the first panther destined for overseas – Scandinavia, to be precise. Proven Transport AS, based in Norway, was the first international customer to receive a DOLL panther in the form of a 3-axle semi low-loader.

Over the years, the panther has covered many miles of road and has overcome some very specific challenges – including transporting railway materials. Transports Chervier SA has been using a 6-axle panther since 2011 – the semi low-loader holds 70 t trains as securely and stably as if they were on rails.

The unique panther PLUS PACKAGE

We have always known that our panther is invincible – and at the IAA we went one step further with the launch of the panther PLUS PACKAGE. From this point on, DOLL would offer a 5-year warranty – unique on the market – for all panther undercarriage components. The company also presented a 6-axle panther low-bed with self-steering axle for the first time.

The panther is the No. 1 choice for heavy haulage – not just for civilian transporters, but for military applications as well. The German armed forces were the first NATO army to use the new axle technology. The first telescopic 3-axle panther semi low-loaders reported for duty and went on to support the German army in all kinds of different logistical operations.

A new chapter in the panther's success story – launched at the IAA. A computer-based CAN bus system replaced electrical pressure switches and menu-based radio. DOLL tronic – featuring keypads and radio remote control – was born, providing an entirely new level of safety and convenience. Just four years after the panther's market launch, DOLL lived up to its reputation as an innovation leader by introducing this innovative operating and control system.

Austrian company Felbermayr Holding GmbH commissioned the largest panther to date: a 10-axle semi low-loader. This was followed by another in the same year for Thomas Scheder Schwertransporte GmbH. These special trailers, which are capable of holding huge loads weighing over 100 t, are still considered very special vehicles to this day – and therefore represent a major milestone for the DOLL panther.

Back at the IAA in Hanover, DOLL continued to ensure that the panther would be well-equipped for the future, and once again demonstrated its innovative strength for the heavy-duty market. An initial prototype of the DOLL connect trailer management system was presented at the IAA for the first time. Its aim is to enable networking and output of relevant vehicle data such as tyre pressure or fifth-wheel load in a single system.

Yet another innovation: EEP

Easy track adjustment for the panther at the touch of a button, without having to judging it by eye or make the adjustment on a straight section of road? Not a problem thanks to the position-independent electronic track adjustment system (EEP). This system ensures absolute safety and maximum convenience for DOLL drivers.

It makes us proud to look back on 10 years of the DOLL panther. But we're not resting on our laurels. Quite the opposite in fact: we're already working on the next chapter in our success story.

THE next chapter: the new low loader X